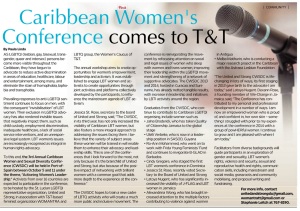 As LGBTQI (lesbian, gay, bisexual, transgender, queer and intersex) persons become more visible throughout the Caribbean, they have begun to advocate to reduce active discrimination in areas of education, healthcare, labour and entertainment, among many, and eliminate the stain of homophobia, biphobia and transphobia.

Prevailing responses to anti-LGBTQI sentiment continue to focus on men who have sex with men, and the buggery law with the consequent invisibilisation of LBT women. Their exclusion in LGBTQI advocacy has also rendered invisible issues that negatively impact them such as child custody, employment discrimination, inadequate healthcare, a lack of social service interventions and an unresponsive legal system. LBT women’s issues are increasingly recognised as integral in human rights advocacy.

To this end, the 3rd Annual Caribbean Women and Sexual Diversity Conference (CWSDC) will be held in Port-of-Spain between October 5 and 11,2015, under the theme, “Actioning Women’s Leadership.” Activists from over 16 countries are expected to participate in the conference, to be hosted by the St. Lucian LGBTQI representative organization United and Strong in association with T&T-based feminist organization WOMANTRA and LBTQ group, the Women’s Caucus of T&T.

Jessica St. Rose, Secretary to the Board of United and Strong, said ‎”The CWSDC in its third year has not only increased the visibility of Caribbean LBT women but also fosters a more integral approach to addressing the issues facing them. I believe that the variety of subject areas these women will be trained in will enable them to enhance their advocacy and leadership skills. This is one of the conferences that I look forward to the most not only because it’s the brainchild of United and Strong, but also because of the positive impact of networking with brilliant women with a common goal that adds more depth to the experience at the conference.”

The CWSDC hopes to train a new cadre of LBTQ activists who will create a much more public and inclusive movement. The conference is reinvigorating the movement by refocusing attention on social and legal issues of women who sleep with women and trans women, improving their leadership within the LGBTQI movement and strengthening of a network of supportive advocates. The CWSDC 2013 and 2014, hosted in Curacao and Suriname, has already netted tangible results with increase in leadership and initiatives by LBTI activists around the region.

Women such as Jalna Broderick, who has taken Quality of Citizenship Jamaica to the global stage; Ulelli Verbeke, who is now in a leadership position in SASOD, Guyana; Ro-Ann Mohammed who went on to work with Frida Young Feminists’ Fund and continues to invigorate B-GLAD in Barbados; Cindy Gregoire who staged the first LBT women’s conference in Dominica; Jessica St. Rose, recently voted Secretary to the Board of United and Strong; Latoya Nugent who has significantly increased the visibility of J-FLAG and LBT women in Jamaica; Alexandrina Wong who has brought increased attention to the multiple factors contributing to violence against women in Antigua and Melba Mathurin who is conducting a major research project in the Caribbean with the Astraea Lesbian Foundation, are graduates from the CWSDC who have and continue to contribute considerably to Caribbean LGBTQI organising.

“The United and Strong CWSDC is life-changing; in lots of ways, its first staging in 2013 gave birth to the advocate I am today,” said Latoya Nugent. Dexann Rose, a founding member of We-Change in Jamaica, said “the Conference has contributed to my personal and professional development in a number of ways. I am now an empowered woman who is proud of, and confident in her own skin – something I struggled with prior to my experiences at the conference in 2014 with a group of powHERful women. I continue to grow and I am pleased with where I am today.”

Facilitators from diverse backgrounds will guide participants in an exploration of gender and sexuality, LBT women’s rights, violence and security, sexual and reproductive health and rights, communication skills including mainstream and social media, grassroots and community mobilising and proposal writing and fundraising.

This site uses Akismet to reduce spam. Learn how your comment data is processed.

What are people looking at?

Walk the paths of a beautiful dream